Why I hate Linux… 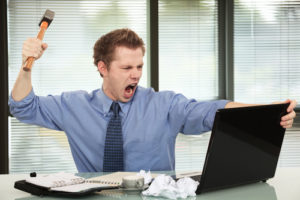 OK, so I admit that I have been a Microsoft user since DOS 2. I still think DOS 3.3 was the best ever OS. I’m on Windows 10 at the moment and I’m quite happy with it. Most of my applications only come for Windows and some for Mac. But I can get everything I need for my developments via windows with little issue. Linux, when used as servers, are a different kettle of fish, and as far as I know, they excel at that. This is really about the home or work experience. (and only my experience so far)

At the moment I am setting up the Nvidia Jetson TX1 development board to have a play with GPU programming along with IOT and robotics. I have a long way to go on these subjects, but looking forward to it.

However, the development environment for the Jetson TX 1 and the flashing utility is Linux (or Ubuntu to be specific) based and this is forcing me down that route.

My first thought was.. “Ill run Ubuntu in  Hyper-v  – mainly so that I have access to all my other windows based apps at the same time. But, as it turns out, Hyper-V cannot do USB pass through which rendered it useless for this purpose. A bit of googling later and it seems Oracle’s Virtual Box can do USB pass through, Great.

I had to uninstall Hyper V because Virtual Box and Hyper-V won’t play ball together. I don’t know much about how VM’s work, but guess the underlying architecture can only deal with one virtual machine engine at a time – I’m ok with that.

Having installed Virtual Box and once again installed Unubtu (along with the Nvidia Jetpack install), I tried to run the installation software. It detected the passed through USB device for the Jetson – Good new… but…. it just kept failing at different points of the flashing. ok, onto the Nvidia developers forum to ask. The response I got was. “Nvidia does not support virtual machines for Jetpack and device flashing.

This all meant that I had to go for dual boot on my desktop which, initially was easy. Once Ubuntu was installed, the Jetpack software for Jetson TX1 worked perfectly. I was a happy man…. for a bit.

The problem with Linux, other than having to get to know and understand a very different system is that it’s hard to get things to work – this is where Microsoft and Apple have done so well. There are no Nvidia graphics drivers for my GTX 8010 graphics card, so while it runs my monitors, it’s not doing so with the full drivers. No driver for my Sound Blaster Z – so can’t get that to work at all.

Then when it comes to installing software, it’s not as simple as download the install package and double-click. Sometimes you need to use APT-Get, sometime DPKG. half the time it fails as there are other dependencies requires which you then have to find and download.

And I think that is the main reason why I hate Linux – it’s not easy to get things going unless you have a very standard machine and don’t require much in the way of software. I’ll learn the system and get used to it – and who knows – perhaps even enjoy it. But until it becomes easy to install, operate and has drivers for even basic things like Nvidia graphics cards, it simply won’t be used by the general public – It has a long way to go.

Ubuntu is free so one can’t complain too much, but still…

I am amused that while it’s Nvidia that’s forcing me down the Linux, they don’t have a Linux driver for their graphics card!

I’m going to install Ubuntu on my laptop and try the whole experience on that – along with free word processors etc.