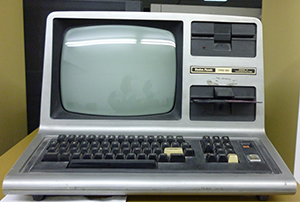 My very first memory of a computer was at a friends house when I was about 7 or 8 years old (in South Africa). In the lounge was a glass cabinet with a homemade computer, screen and keyboard. I clearly remember it. It had a white (or more grey) monochrome monitor – probably 12 or 15 inch (CRT of course). Beside the monitor was a ‘rack’ of open PCB’s wired up to form the computer. I had no idea about what made up a computer or even much about computers.

My friend’s father had opened the cabinet and switched it on – I remember the cursor flashing on the screen and I was allowed to type something…. I was in heaven, a dreamland, a fantasy. I have no idea what I typed (probably my name), but I was mesmerised by the letters appearing on the screen as I typed.  I had no idea of programming or anything – this was the first time I have ever seen a computer, but that moment in my life stuck with me and it sat there in my mind just waiting….. I was far too young at the time and computers of any sort were extremely rare.

As time went on, I became more aware of computers, but they sat firmly in ‘far away land’ and were mystical. You have to remember – this was the late 70’s. No home computers, no internet, no mobile phones… no fancy electronics at all. It was a simpler time.

But I was fascinated with electronics and my father, bought me a ‘My Kit 7’ electronics kit to play with. Again it was the most fascinating thing I have ever seen. With lots of components and even a small integrated ‘chip’. With this, there were over a hundred experiments to wire up from buzzers to lie detectors to a radio. I was hooked. Before that, I had messed with a few things, but never before had I had the components and a book to work from. This was great….

But I was also frustrated – I wanted to do bigger things. I wanted to build a computer. I remember thinking ‘Even if I can just get a dot matrix display connected to a keyboard working..’. but alas, the bulbs I was trying to put together in a matrix just would not behave. I had no idea about logic circuits and latches at the time and no one to guide me. I remember frustration after frustration. I just didn’t have the know-how at age 8 or 9!

My mother me to the university for a private demonstration of a computer – Heaven knows how she organised this but wow,  the day blew my mind. The person showing us, had a computer on his desk (this was probably early 80’s?) It was a green screen CRT. he showed us a number of things, but I remember the basic graphics (CAD) program he had and the ‘mouse’ – ‘Mouse’ in inverted commas because it was not really a mouse, but a kind of pointing device. There was a small white grid lined board hooked up to the PC and a device that looked a bit like a map compass with a cross-hair.  It did not work that well, and he had to keep ‘re-orienting the device on the board to set the location properly. None the less, it was pure magic.

I think my next introduction into computers was via my father – He was an architect and had a successful architectural firm in Randburg, South Africa. It was a typical architects office in those days – a large room with about 15 or so large drafting boards. Somehow, my dad, who is a complete technophobe, decided to buy an architectural CAD computer. In those days (early 80’s?) , this was no small thing. He decked out a whole room for this thing and it was as fancy as you can get. As far as I can remember, he was one of the first in South Africa to buy one of these things (I’m guessing one of the first small businesses). It had two monitors, one monochrome and one large colour. It has two floppy disks (no hard drive) and a huge A1 plotter as well as a dot matrix printer. It must have cost a fortune. There was also a ‘pen’ and a board that had commands on it and a pad that was used for positioning the cursor. State of the art for the time.

It took a stack (and I mean about 40) floppy disks to get running, First to get the operating system in and then the CAD application. It was amazing to see it come to life, to see the text on the monochrome and then the colour monitor.

I used to play with this thing and draw pictures (probably much to the irritation of the guy that was responsible for it – but hey, I was the bosses son  – so apologies to him.

Then, someone’s father at my primary school donated two TRS80 machines. By this time there were a few around and people were getting to know about them. The school started a programming class which I immediately joined. I was terrible. I remember trying to get a for loop to work and not quite getting it. I don’t think I was part of the class for long…..

At the age of about 10, I got a newspaper round job which meant getting up very very early in the morning to deliver a stack of newspapers around the neighbourhood – It was a long cycle in the morning before school and I did it every day – come rain or shine. Though I have to admit there were many a rainy or late day that my poor mother drove me! Still, I earned enough money and saved enough birthday money/donations to buy a ZX81, and that really where my career with computers started.

I spent hours in front of the TV with the small black box of magic, programming it. I wrote a very simple drawing program but was very disappointed in it…. the XZ81, with its 1K of memory limited. But I loved the machine and a programmed all sorts of things. And then the ZX spectrum came out. Not sure how I bought that, but this was such a leap. It was only the 16K version, but it was colour and has a ‘better’ keyboard.

I was not into games like my friends were – They did not really excite me. What did excite me was writing programs. I decided to take the drawing program idea and write it on the Spectrum. The main thing I wanted to do was have control of the individual items. I was frustrated by the drawing program that came with the spectrum (and the one I wrote on the ZX81) as when you deleted bits with the eraser,  things around it got deleted too. I thought it would be much better if the computer knew about each line and allowed you to change, it or delete it. There was no mouse for the spectrum, so I implemented each object in an array and allowed the user to flip from object to object and then either edit it or delete it. The program was called Graphi and I spent huge amounts of time on this, including many a lesson with my grandmother who was a maths teacher, learning geometry which I had not started learning at school yet.

Of course, things progressed to the Commador 64, then an Acorn Atom.  It was on the Acorn Atom that I first started with a bit of machine code. I just loved (and still do) the idea of programming at such a low level.

My first proper job was building computers up for customers. This was in the XT days and the 286 was not even around yet. Of course, things moved fast and soon the 286, then 386 arrived, more memory, bigger drives and everything cheaper. My first ‘proper’ machine was an XT which I had made up from old leftover bits. It was great, as it really gave me more to do on the machine and I could start using other languages like Pascal. It was not until quite a bit later that I learned C. But when ‘visual’ languages started, I tried both Visual Basic and Delphi 1 and was immidiatly consumed by Delphi 1. I used Delphi 1 until version 7.

The rest is really history from there. I progressed through various jobs, and computers finally ending up for 18 years in the financial industry in the UK with my own business and a team of developers. I sold this a few years ago and am now ‘playing’ with one older tech and some new tech, but more where my heart sits – Electronics and Embedded software. Not that I don’t love programming under Windows, it’s just that for me there is more excitement and magic with the embedded world.

One of my dreams, since I was a child, was to build my own processor and computer – and that is one of the 1000 projects that I am starting now.